Construction of the Court Street Plaza is Coming To A Close 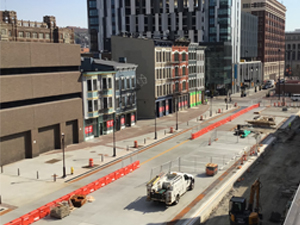 The Court Street Plaza Project is in its final two months, with overall completion on track for the end of May.  After losing nearly the entire month of February to winter weather conditions, the team rallied together and got back on schedule.

Read more on how this project came to be

In March, the team was able to cast the concrete roadway, parking pavements, and lay the associated brick pavers.   Additionally, the south trench drain structure that spans the entirety of the city block, parking curb, and an ADA infill strip were cast—all in one month.   With this work complete, the public has been able to begin exploring the reopened North sidewalk and roadway of Court Street.

The same treatment has begun on the south sidewalk. The team is in the late stages of demolition of the south sidewalk. Following demo, the will complete the installation of the southern tree wells, light pole foundations, and underground infrastructure. This prepares for continuation of the new concrete sidewalks with featured brick pavers. The new walkways will extend to each south building façade for the entire block between Vine and Walnut Streets.

Check out an award-winning collaboration between HGC and Human Nature

Once finished, the Court Street plaza will feature space for a stage at the intersection of Court and Vine, as well as public art installations near the streetcar station. These additions will reimagine Court Street as a more pedestrian-friendly destination.  The project will widen sidewalks, remove the median, and reduce on-street parking. It will also create more space for outdoor dining and other open-air events.

Want to work with a company committed to their community? Check out our job opportunities. Join a company that builds community, builds relationships, and builds each other. Join HGC and Build Every Day.