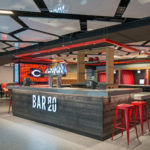 As the Cincinnati Reds were gearing up to take the field at Great American Ball Park, HGC Construction was putting the finishing touches on the newly renovated Scouts Club.

Check out another project at the Great American Ballpark. [4]

The area formerly known as Scouts Alley is located just above the Diamond Club in the lower level behind home plate. It used to have basic concession areas and restrooms in the area that is available only to the 1,100 to 1,200 fans in the Scout seats section.

This area of the ballpark has been on the list for renovation for some time and Phil Castellini finally decided this year was the time to do it. HGC Construction was excited to partner with the Reds on this transformational project.

Read what clients say about HGC, including Phil Castellini. [5]

Some of the features of the newly renovated area include: