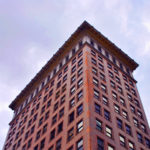 On June 24, 2020, HGC Construction collaborated with the Greater Cincinnati Society for Marketing of Professional Services. They offered GCSMPS members and guests a unique opportunity to receive a virtual tour of the current progress at the Ingalls Building renovation.

Take a peek at the beginning of the project to appreciate how far it’s come.

Greater Cincinnati SMPS (GCSMPS) is a chapter of the Society for Marketing Professional Services (SMPS)—a community of marketing and business development professionals working to build strong relationships for their A/E/C companies. Through networking, business intelligence, and research, GCSMPS members gain a competitive advantage for their firms.

The History of the Ingalls Building

The Ingalls building is the world’s first reinforced concrete skyscraper. Leading into the 1900s, the tallest reinforced concrete structure was only six stories high. The cost savings and fireproofing benefits of building with concrete made the material very appealing to architects. However, many people in the engineering community, not to mention the public, were scared. They feared that because of concrete’s low tensile strength, a too-tall concrete tower would collapse under its own weight.

At the turn of the century, Melville Ezra Ingalls  was the President of the Chesapeake & Ohio Railroad. He became the primary financial investor for a new construction of a 15-story reinforced concrete skyscraper—the Ingalls Building.

It took two years to convince city officials to issue a building permit. Once underway, construction took only 8 months. The contract price was $400,000—approximately $11.6MM in today’s dollars. Stories tell of a reporter who stayed up all night, hoping to be the first to capture the moment of the building’s inevitable collapse. But the building remains. It was designated a National Historic Civil Engineering Landmark in 1974 by the American Society of Civil Engineers. In 1975, it was added to the National Register of Historic Places.

In 2018, SREE Hotels received key approvals from the City of Cincinnati to redevelop the historic building into a completely custom Courtyard by Marriott. SREE Hotels brought on HGC Construction as the contractor, and Luminaut as the architect—the same team that recently renovated the Cincinnatian Hotel as it became part of the Curio Collection by Hilton. SREE also worked with HGC Construction on the conversion of the former Enquirer Building on Vine Street into the dual-branded Hampton Inn & Suites and Homewood Suites. The team is excited to be writing the next chapters to these 15 stories.

Want to work with a company that restores iconic local treasures? Check out our job opportunities. Join a company that builds community, builds relationships, and builds each other. Join HGC and Build Every Day