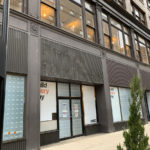 Construction can be mysterious to an average bystander. Take, for example, the job site at 37th W 7th. Anyone passing by on the street would see a former storefront, the windows covered with bold signage. And it has looked that way for several months now. But inside, things have been changing rapidly.

The nine-story structure, known as the Jewelers Exchange Building, was built in 1915. The 58,000-square-foot office building has also been previously known as the Resor Building and Willis Building. It was purchased by Vision Hospitality in 2017, and will be renovated into a new downtown hotel. HGC is the general contractor on the complex renovation.

Check out other HGC hospitality projects.

On-site work has been progressing since November of 2018. In March, the team removed a non-functioning chimney. By April, the team had completed demolition on all nine floors and had finished the elevator pit. They are working on framing, beginning on the top floor, and soon they will cut the new elevator shaft through the center of the building.