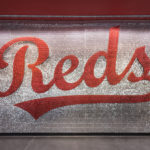 On Friday, March 29, a “Who’s Who” of Cincinnati’s Major League Baseball history attended the eagerly anticipated Hall of Fame ribbon cutting. HGC was the general contractor for the extensive renovations performed on the Hall of Fame and Museum.

See the full slideshow of the Hall of Fame and Museum.

After words from special guests, a ceremonial ribbon cutting occurred and then VIP and media received a sneak peak of the Hall. The doors were then opened to the public at 1:50 p.m. to commemorate the team’s 150th anniversary this season. HGC has been a long-time partner of the Castellini family, working in the Great American Ball Park for nearly a decade. This was an incredible high-profile project with a tight schedule, and the team is proud to showcase the final product.

Check out other Reds projects by HGC.